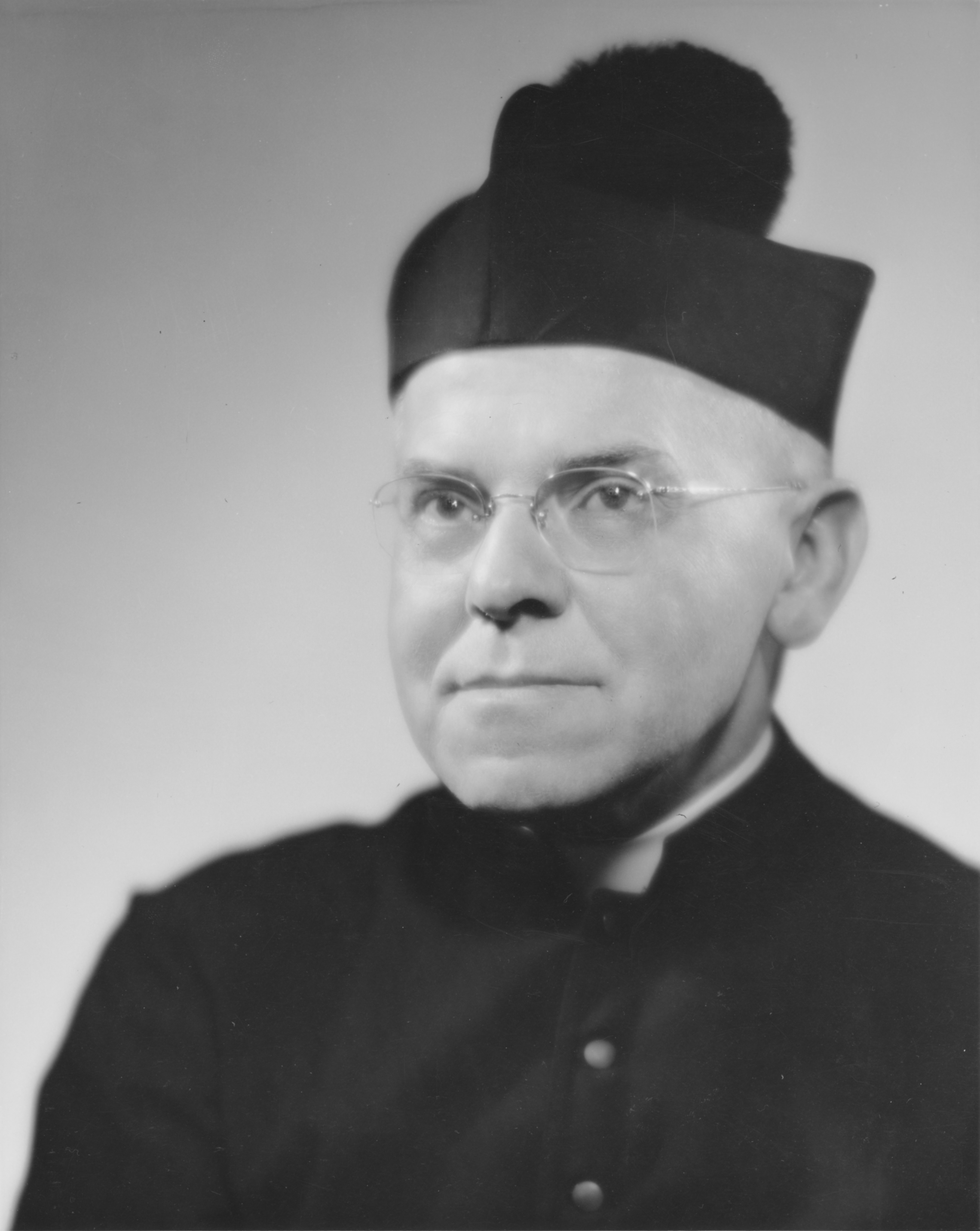 Reverend George Renneker was born on August 6, 1889 in Cincinnati, Ohio and entered the Society of Mary in 1904. He first came to UD in 1906 (when the school was still called St. Mary’s Institute) as a graduate of a Cincinnati parochial school and graduated from St. Mary’s in 1910. On August 3, 1919 in Fribourg, Switzerland Reverend Renneker was ordained a priest. He served the University of Dayton for 43 years working as professor, registrar, dean, vice president, and president. During his time as president a Veteran’s Training and Guidance Program was introduced, the Art, Music, Home Economics, Business, and Physical Education Departments were accredited by the Ohio State Department of Education, and the Miami Valley Hospital School of Medical Radiological Technique was also affiliated. Reverend Renneker also presided over the University’s centennial celebrations. During his term student enrollment grew from 900 to 3800. Many of these students were veterans going to college on the G.I. Bill. After his retirement from the presidency in 1953 Reverend Renneker became director of Mt. St. John and acted as director of the Cincinnati Province from 1959 until his death in December 1969. 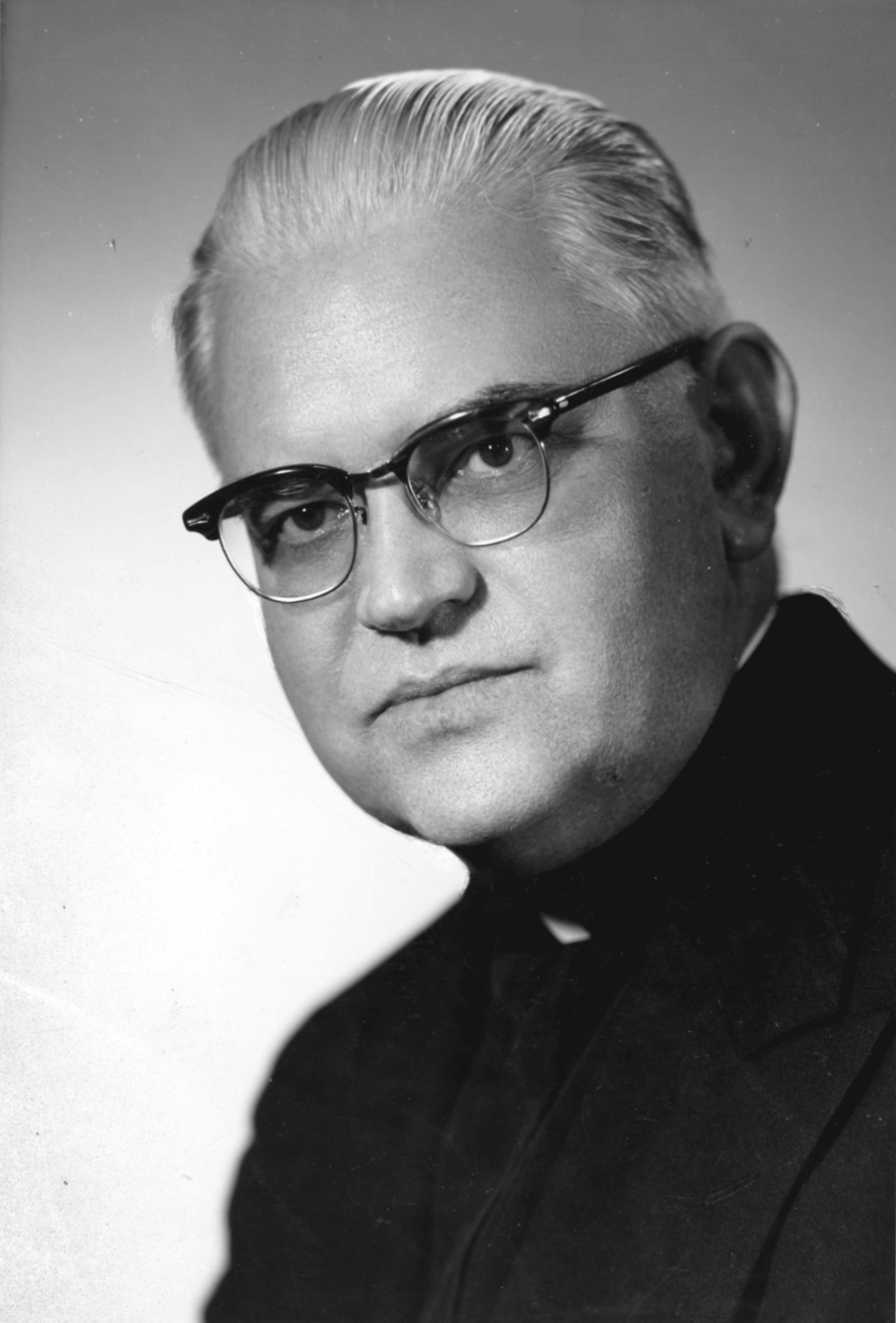 Reverend Andrew Seebold was born in Louisville, Kentucky in 1903 and was a graduate of the University of Dayton in 1924 and was ordained a priest ten years later in Fribourg, Switzerland. He received his M.A. in sociology from the Catholic University of America in 1943 and went on to receive his Ph.D. in sociology in 1947 from the same institution. Reverend Seebold taught in Cincinnati, Cleveland, Philadelphia, Convington, and Dayton and was president of Cleveland's Cathedral Latin High School before becoming president of the University of Dayton. During his term as the university's president the first community wide fundraising drive for new physical facilities was launched and by 1959 Wohlleben and Sherman Halls were built. The University then joined the prestigious Ohio Foundation of Independent Colleges. In 1954 UD was named one of the fastest growing universities in Ohio and the largest private undergraduate university. Reverend Seebold also witnessed the beginnings of UDRI in 1956. He instituted a University Self-Survey, a document that laid the groundwork for the plans and growth of the 1960s. After leaving the presidency Reverend Seebold was named Dean of the School of Education at the Catholic University of Puerto Rico. In 1961 he returned to UD to serve as administrative director of psychological services and professor of sociology. He retired from teaching in 1968 but continued as director of psychological services until 1972. Reverend Seebold passed away in 1979. 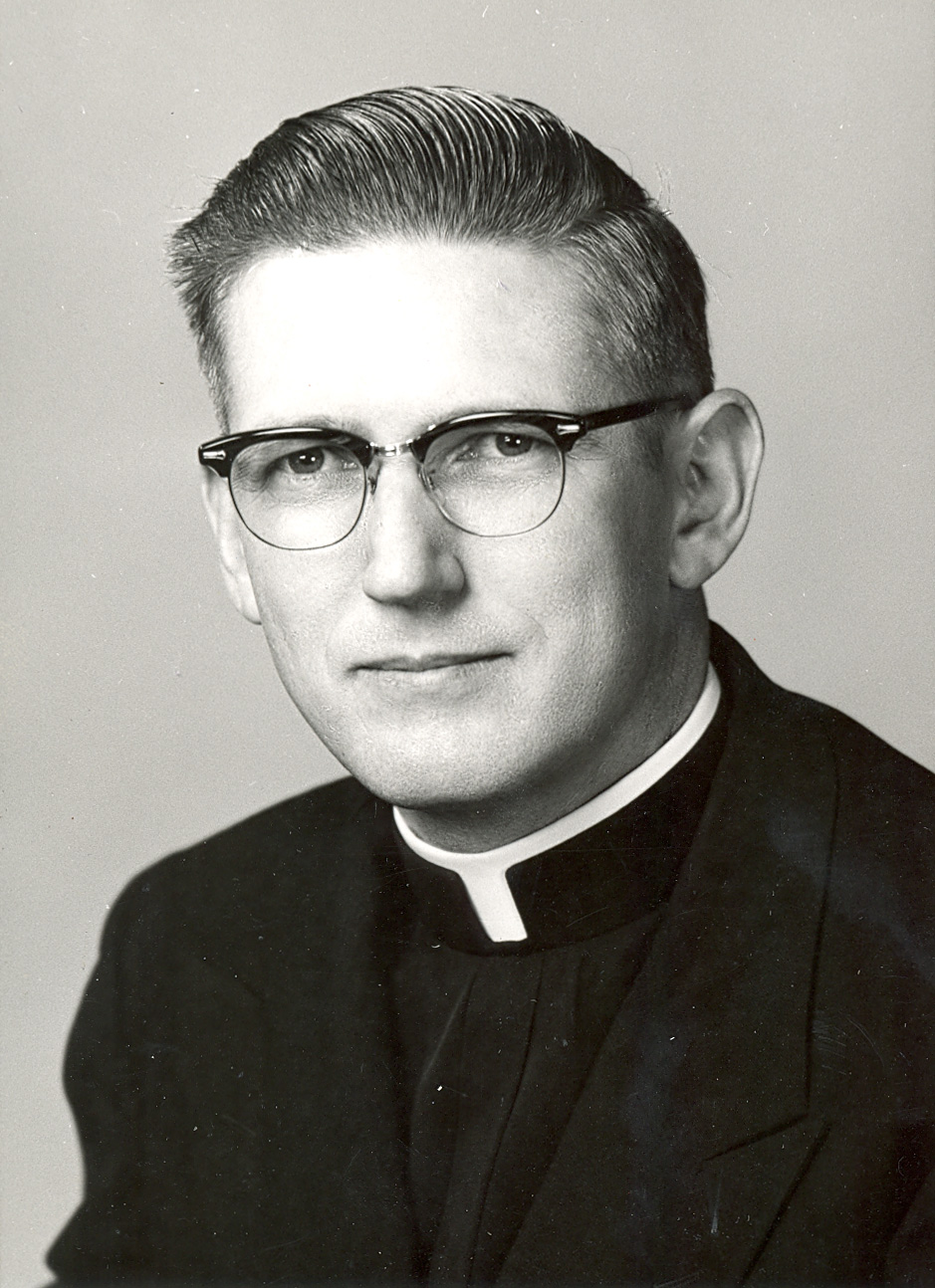 Reverend Raymond Roesch was born in Jenkintown, Pennsylvania in 1914 and joined the Society of Mary in 1933. Three years later he graduated from the University of Dayton. He went on to receieve his M.A. degree in psychology from the Catholic University of America in 1954. He prepared for the priesthood at the Catholic University of America and St. Meinrad Seminary in Indiana. He was ordained at Mt. St. John Seminary in Dayton on May 30, 1944. After receiving his Ph.D., Roesch came to work at UD as a professor in the psychology department serving as the department chair for seven years before becoming president in 1959. Reverend Roesch continued the building program started by Reverend Seebold. During his twenty year term Kettering Lab, Roesch Library, Kennedy Union, Miriam Hall, the Arena, Marycrest and other student housing, the Physical Activities Center, and the Music and Theater Building were constructed. Reverend Roesch presided over the largest student enrollment growth in UD's history, from 3700 in 1959 to 7500 in the late 1960s. In 1960 the Graduate School was reopened and in 1974 the Law School was reopened. Reverend Roesch passed away on July 7, 1991 in Dayton. 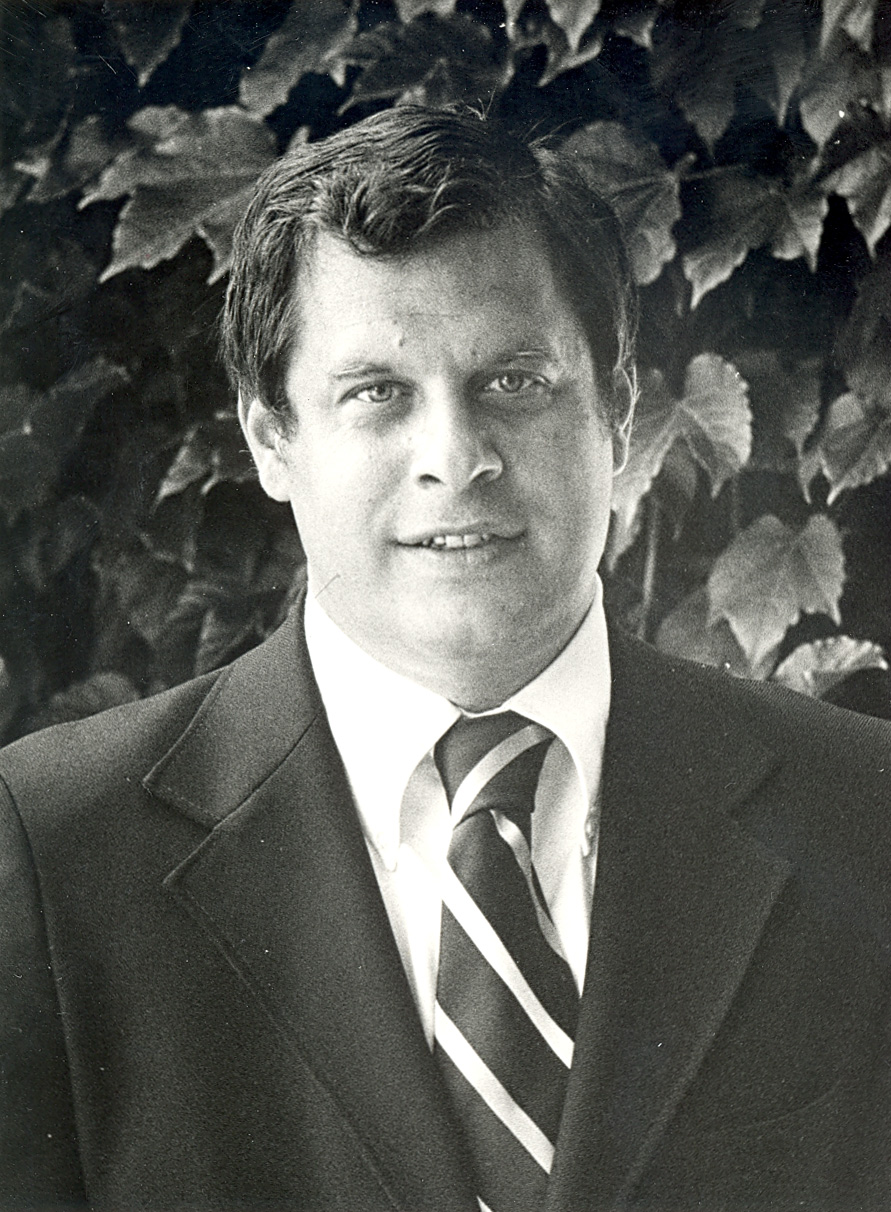 Brother Raymond Fitz enrolled at UD in 1959 and joined the Society of Mary. In 1964 he earned a B.S. in Electrical Engineering from UD and an M.S. and Ph.D. in Electrical Engineering from Polytechnic University in Brooklyn, New York. He returned to UD as a professor in 1969 and taught industrial and electrical engineering. From 1976-1977 he worked at the Kettering Foundation on complex social systems and urban planning. During his presidency (the longest in UD history) he instituted Vision 2005, a plan to help UD become a national leader in Catholic higher education. Nine new campus buildings were constructed during his term including the Jesse Philips Humanities Center and Keller Hall. It was during his time as president that the University of Dayton became known as one of the top Catholic Universities in the country. Brother Fitz has a strong interest in the health of the community and some of the organizations he works with include the Family and Children First Council, the Homeless Solutions Leadership Team, the Fitz Center for Leadership in Community, and the Dayton Public School Community Advisory Council. He currently holds the position of the Ferree Professor of Social Justice at the University of Dayton and has taught classes in Politics and Social Justice, Christianist, Citizenship, and Society, and Leadership in Building Community. In 2001 he was honored by the President's Club and received the Citizen Legion of Honor Award and in 2011 he received the Cardinal Bernardin Community Service Award.

Dr. Daniel Curran is the University's first lay president. He received his Bachelors in sociology from St. Joseph's University in 1973, Masters in sociology from Temple University in 1978, and a Ph.D. in sociology from the University of Delaware in 1980. Prior to becoming president of the University of Dayton, Dr. Curran worked as the executive Vice President of St. Joseph's University in Philadelphia. He is the author of eight books (many of which he co-authored with his wife). Dr. Curran is committed to social justice and this is what his writing focuses on. During his time as president he has nearly doubled the size of campus with the purchase of surrounding land including the purchase of the former NCR World Headquarters (a Fortune 500 Company). Marianist Hall was built in 2004, the RecPlex was finished in 2006, and there have been renovations to Marycrest and Stuart Halls along with the construction of a new Central Mall. Dr. Curran also introduced one of the nation's first bachelor's degrees in human rights studies. After taking a one year sabbatical, Curran will join the faculty as a professor. As president emeritus, he will teach and conduct research on campus and serve as executive-in-residence for Asian affairs in the University of Dayton China Institute in Suzhou, China. Dr. Curran began this new adventure on June 30, 2016. 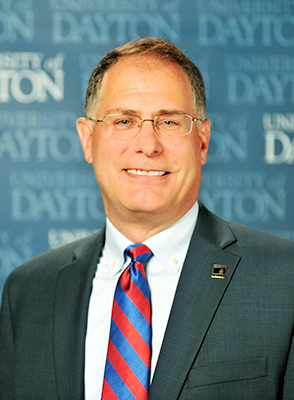 Dr. Eric Spina, who has served Syracuse University for 27 years, including nine as vice chancellor and provost, was selected unanimously by the University of Dayton's Board of Trustees. He earned his doctorate and master's degree from Princeton University in mechanical and aerospace engineering. A prolific researcher and author with a 20-year research focus on experimental high-speed fluid mechanics, he has worked on multi-million dollar grants from NASA, the National Science Foundation and the Environmental Protection Agency. He holds two U.S. patents and authored, co-authored or edited dozens of academic publications. Dr. Spina's first day was July 1, 2016.