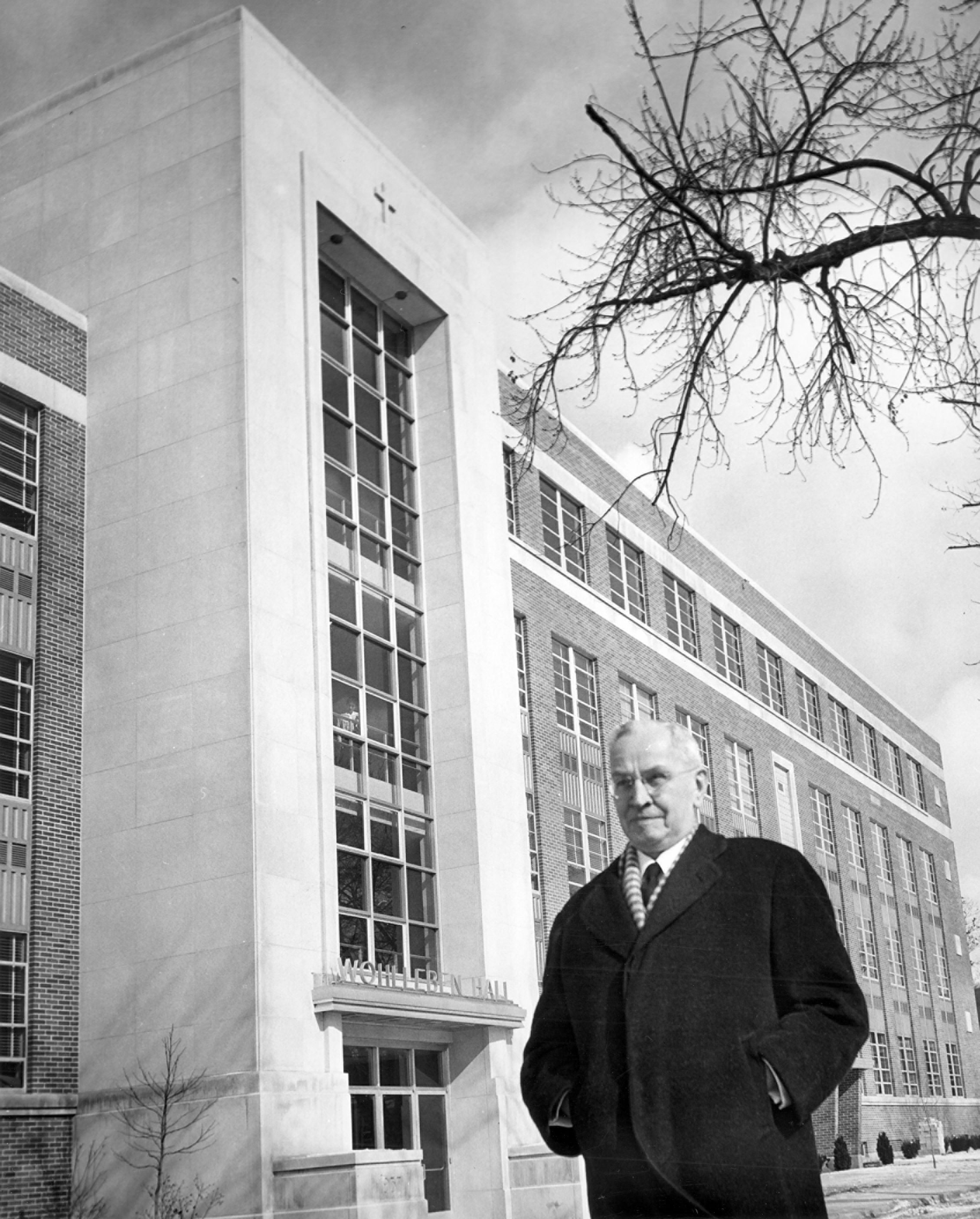 Cost of the building: $1.6 million

Size: 90,000 square feet—largest building on campus at the time

Sherman Hall, the building just 60 feet west of Wohlleben Hall, was completed in 1960 to accommodate biology, physics, home economics, mathematics, and psychology classes, as well as research facilities. The building is named for John Q. Sherman who was one of the founders of the Standard Register Co. and the president of UD’s board of lay trustees in 1939 when he died. In 2003 Sherman Hall and Wohlleben Hall were connected in a $22 million dollar project, creating what is now the Science Center. 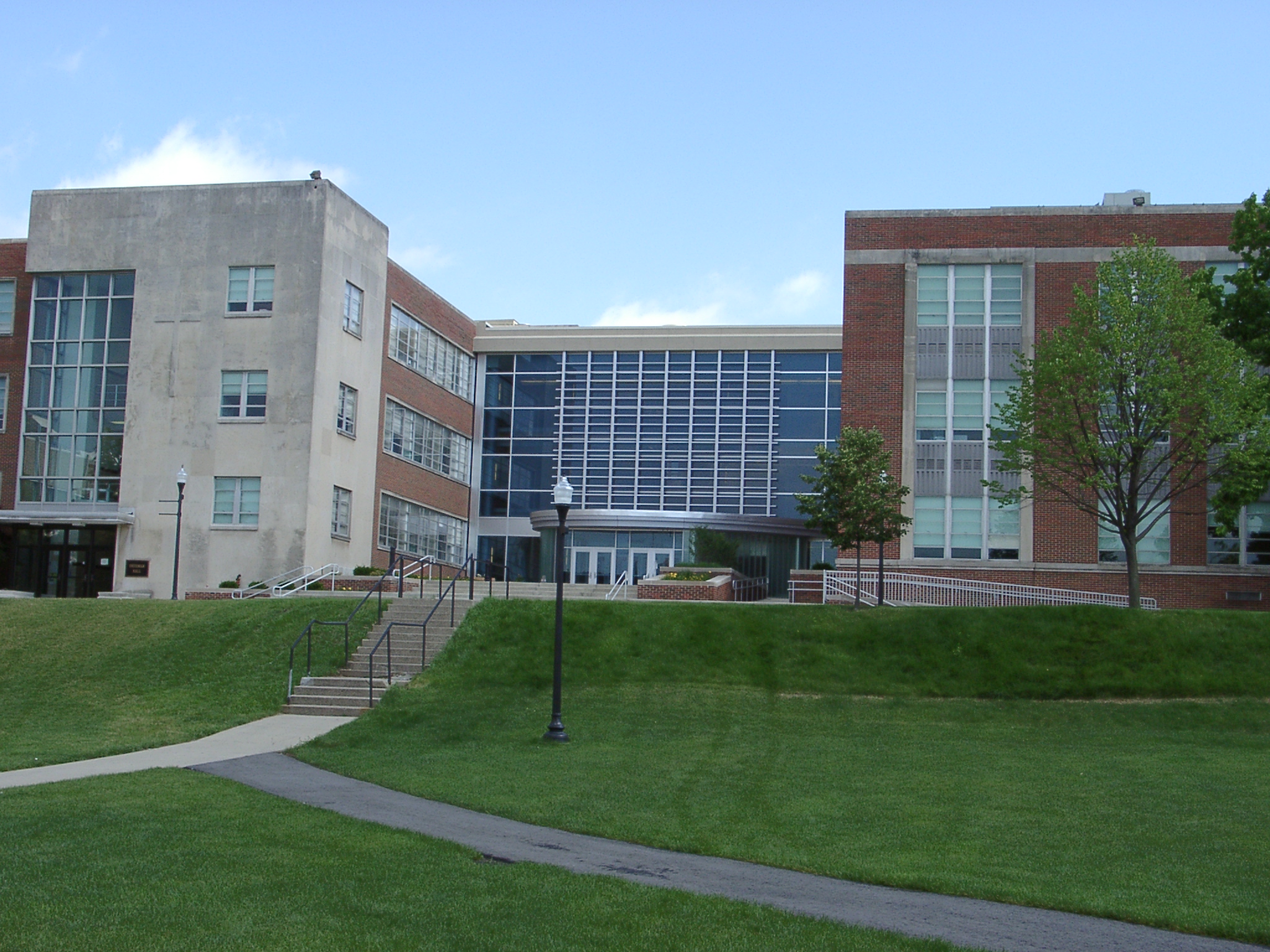 Doc Wohlleben kept up with chemistry alumni in his annual Christmas newsletter. Each letter, sent out to over 200 former students, mentioned the current state of the department and the University. In his 1949 Christmas letter he writes:

"As for myself, I am not doing so badly. I still carry a respectable daily load and I have not lost a day this semester because of illness. There is so much to do day after day, so much to read, so much to plan . It is alleged (!) that a woman's work is never done; well, how about the professor's work?"

Click on the slideshow to go to the UD Archives' Flickr page and view captions for each photo.

William Wohlleben was born in Chicago in 1876 to parents who had emigrated from Luxembourg in the 1850’s. He attended St. Francis School, taught under the direction of the Brothers of Mary, and quickly realized his calling to be a Brother and an educator. At the age of thirteen he entered the Postulate of the Society of Mary at Nazareth, on the campus of what would later become the University of Dayton. In 1892 his religious profession officially began as he entered the Novitiate. Wohlleben spent his first few years as a Marianist teaching at Catholic schools in Baltimore, Maryland; Erie, Pennsylvania; and St. Louis, Missouri. In the summer of 1904 his superiors in the Society of Mary sent him to the University of Fribourg in Switzerland to continue his education.

William Wohlleben was the first American Marianist to earn a Ph.D. in science which he received from the University of Fribourg. He joined the faculty at St. Mary’s Institute in 1909, where he established the Chemistry and Chemical Engineering Departments.

Dr. Wohlleben was given the task of building the Chemistry Department from the ground up. In his first six months on campus, Wohlleben prompted the installation of the first gas pipe on school grounds which fueled the Chemistry laboratory’s Bunsen burners, then housed in a small room above the old gymnasium. His role as the head of these departments kept him busy in the classroom, limiting extensive research and outside scholarship, but Dr. Wohlleben was an educator first and foremost. He kept up with his students with an annual Christmas letter that he sent out to each graduate of his programs.

When Dr. Wohlleben celebrated his fiftieth year as a Marianist in 1942, a group of alumni organized a surprise dinner in his honor at the Biltmore hotel in New York. Ten years later when he celebrated his sixtieth year as a Brother of Mary, his students again held a celebration. On this occasion his students honored him with this special message: “Monuments have been erected to the Unknown Soldier, yet one of the greatest heroes is the unsung teacher. He toils late into the night of life with love and devotion fashioning his own monument. In this year of his Diamond Religious jubilee we, the products of his fashioning, students, present and past, give public testimony of our esteem and gratitude to Brother William, our teacher and our friend who has been a dominant influence in our lives.”

There is no current finding aid for the Bro. William J. Wohlleben Papers, but his papers can still be accessed in the University Archives.

Other highlights from the papers: